U.S. stocks were up modestly the first half of the year. The trip was anything but calm. A sharp drop early in the year was followed by a rally moving in tandem with higher oil prices. In an unexpected outcome, Britain voted to exit the European Union (EU) in late June and that decision drove equity markets down. Right at month end, the markets ral-lied. Now comes the grueling process of figuring out how to accomplish the first ever exit by a country from the EU. While central bankers around the world have pledged to do “whatever it takes” to revive economic growth, that phrase should be adopted by countries on both sides of the English Channel in order to achieve a split without lasting economic damage.

Many world economies seem to be stuck in a low-growth funk with interest rates bouncing around zero. What would have once been considered mediocre before the 2008 meltdown is now considered good. There is even an expression to describe what we have been experiencing: the new normal. After eight years, the newness has worn off, but has mediocre become the normal state of affairs?

In exploring what has become a growth paradox, following are a few questions that keep going through my mind – along with my own answers.

Q: What is being done to address weak growth?
The dominant tool of the U.S. and many other nations has been monetary policy – lowering interest rates in order to encourage more spending and investment. The Fed and central banks outside the U.S. have taken some very unconventional steps. In spite of unprecedented monetary easing for some time, economic growth remains in a rut. No one is claiming victory.

Q: Maybe we just need more monetary easing to fix things?
We will likely find out. The latest and most extreme move is to force interest rates below zero. European and Japanese central banks have done this and now, about $8 trillion in government and corporate bonds have yields below zero. Yet, there are potential dangers with negative rates. Theoretically, lenders have no incentive to lend and borrowers have every incentive to take on as much debt as possible. Some people react by hoarding actual currency. And entities such as insurance companies and pension plans are threatened with the inability to meet their contractual obligations.

Importantly, economic growth and longer-term rates have tracked each other over time, as seen in Chart 1 (below). With or without central bankers forcing rates below zero, rates would likely still be very low. How negative rates will get economies moving again and how long they will last is anybody’s guess. To quote Charlie Munger of Berkshire Hathaway, “Anybody who is intelligent (and) who is not confused, doesn’t understand the situation very well.” 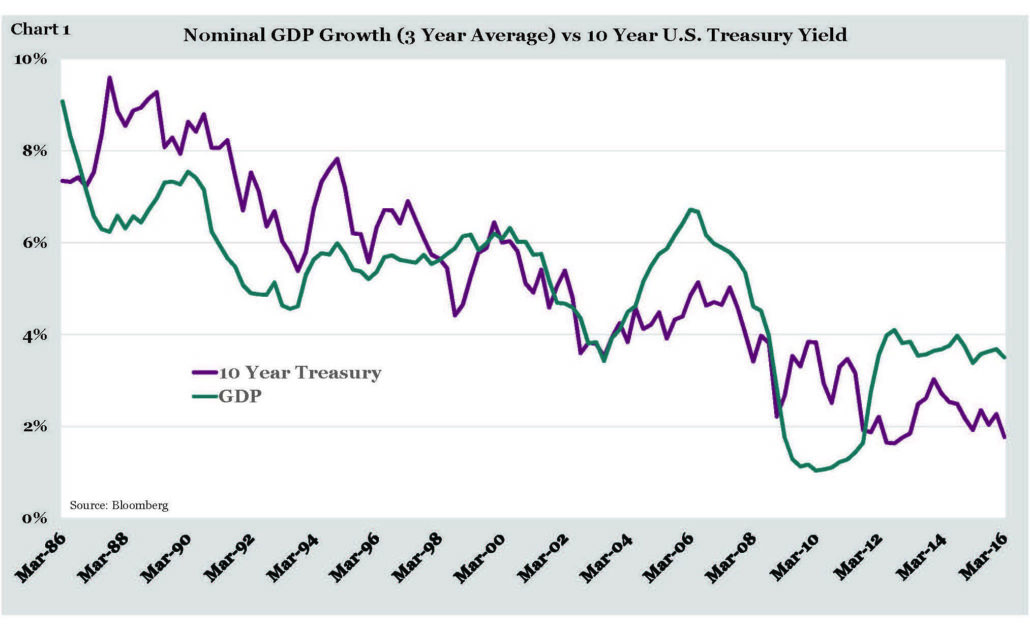 Q: Should governments turn to fiscal policy and aggressively spend their way out of the rut?
Perhaps. Some argue that the U.S. and other countries are being too tight fiscally, which is preventing a rebound. In the U.S., the last fiscal stimulus package was in 2009. In the years since, it has been difficult to sell politicians on the wisdom of a large increase in spending, which would be debt-financed, running up the deficit. The track record of past fiscal stimulus has not always been inspiring. Additionally, there is little agreement between the two political parties coupled with infighting within the parties. Besides, it’s an election year so this option appears moot.

It is helpful to look at Japan as a comparison. Since 1992 its economy has shown little growth. In its “lost decade” of the 1990s, Japan had nine separate stimulus packages, each package averaging 4% of GDP – to little lasting effect. Bottom line: fiscal pump-priming might be an effective tool to bridge a gap but not a gulf.

Q: Are there natural causes that could be a source of persistently low interest rates and slow growth economies?
There are numerous reasons for our economic funk, including working off an over-leveraged debt binge and withstanding wrong-headed government actions. Yet, staying with Japan for the moment, demographic pressures have noticeably increased at the same time. After 40 years of a fertility rate below the replacement level, Japan’s population finally peaked around 2010 and is now shrinking – down by nearly 1 million people in the past 5 years alone. The UN estimates it will fall by another 19 million people (15%) by 2050 and continue falling thereafter.

Germany’s fertility rate also fell below the replacement rate of roughly two children per female of childbearing years in the 1970s. Its population has grown only through immigration. Chart 2 (below) shows the natural population growth (excluding immigration) for Japan, Germany and the U.S. Both Japan and Germany are now experiencing more deaths than births. 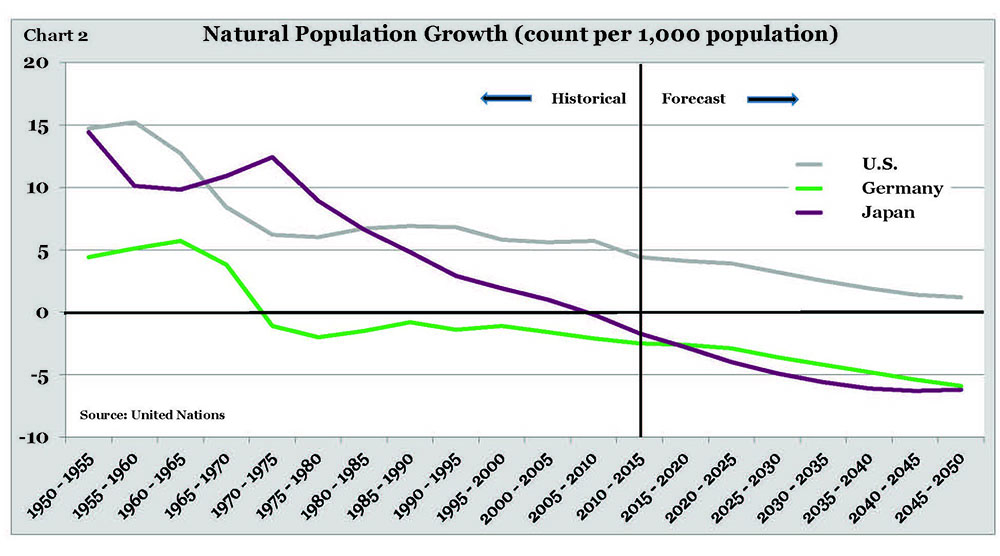 One result getting baked into the mix is that there are fewer and fewer workers available to support retirees. The old age dependency ratio, which measures the number of retirees (65+) relative to working age people (15-64), is climbing sharply in both countries. In Japan, the ratio has gone from 17 per 100 in 1990 to 43 per 100 in 2015. Germany has gone from 22 per 100 to 32 per 100. And the forecasted trend is worrisome. Japan and Germany are the world’s third and fourth largest economies in the world (U.S. and China are first and second respectively).

While demographics are not the only reason growth has been sluggish, there is a linkage. If the source of a country’s economic growth is the combination of population growth and productivity improvements, it’s no wonder growth has flat-lined.

Q: That sounds just a tad bleak. Is the answer to nurture our economies with some wine?
I am not sure that is the solution, but it might not hurt! It is hard to recover from a dearth in births. Japan and other countries are encouraging their citizens to have more children. Maybe this is where the wine comes into play. However, birthrates tend to change gradually and are difficult to alter without resorting to extreme policies or shocks to the system. Almost all areas of the world are facing a population growth slowdown.

The other growth component is productivity improvements – ingenuity and innovation moving us forward. While productivity has been surprisingly weak for several years, there are significant technological advancements occurring in virtually every segment of society. These advancements should ultimately produce economic gains.

Q: I’m ready to come home now. Where does the U.S. stand?
Many have quipped that the U.S. is the cleanest dirty shirt compared to other developed nations. Our working-age population (which includes immigration) continues to grow. Our old age dependency ratio is also well below that of most other developed nations (moving from 19 per 100 in 1990 to 22 per 100 in 2015). However, being a cleaner dirty shirt signals we too have forces that are a concern. Chart 2 (see Page 3) illustrates the slowdown in growth of our natural population. Our fertility rate has hovered at or just below the replacement level for decades. That is not an immediate concern but it will become a challenge if it turns down further or if immigration turns negative. Populist platforms here and elsewhere have made immigration a very hot topic.

The tools required to solve the growth paradox go well beyond manipulating interest rates or more government spending. Boosting productivity is key. Our country’s financial strength coupled with relatively positive demographics also provides us with more flexibility compared to Japan and Western Europe. We are in a much better position to enact policies that encourage and nurture growth, not impede it. But we do need to act. Growth is critical to meet the future financial obligations we have bestowed upon our kids and grandkids.