This would not normally be presented as a multiple choice question, but in today’s financial climate, we could get a variety of answers, so please choose one below:

D. No, the real inflation

is yet to come.

If you are a consumer who recently purchased groceries, gasoline, or a variety of other products, you probably answered A. (yes, unfortunately.)

Indeed, many commodity based items are significantly higher than one year ago. A few items selected from the commodities page of The Wall Street Journal in mid June shows corn up 126 percent, wheat up 95 percent, coffee up 32 percent, and West Texas Intermediate oil up 29 percent versus one year ago. These, of course, are items or ingredients of items we all buy every day.

The official CPI index of all items through May 2011 shows prices are up 3.6 percent from one year ago. Just six months ago that year-over-year number was only 1.1 percent. So the increase in inflation has been relatively sudden and dramatic for such a short period of time.

Many economic reports quote inflation two ways: the all-items CPI and the core rate, excluding food and fuel. They will point out that food and fuel are more volatile on a monthly basis and that Federal Reserve policies have less effect on non-core items. While this is all true, consumer prices and the CPI report include all items. The core rate does remain low, indicating that the current spike is heavily influenced by food and fuel, but did take an unexpected jump in May. 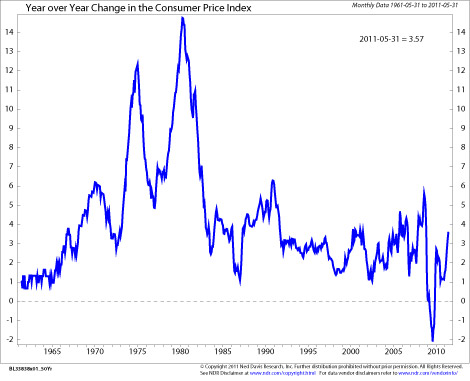 If you are a person who has an economic or investment background you may have answered B (yes, thank goodness.)

Yes, some people are thankful inflation is back because just a few months ago they were worried about deflation. Many think of deflation as a depression-era occurrence. But two years ago, at the height of our economic crisis, the CPI fell into negative territory on a year-over-year basis (deflation) for a period of eight months.

The prospect of longer-lasting deflation is serious stuff. Would you buy a car, a washing machine or a new sweater today if you thought prices would be lower next week or next month? Businesses are breathing a sigh of relief because in a deflationary environment, their products would just sit on the shelves.

In 2008 and 2009, the Federal Reserve, which had spent much of the last 30 years trying to bring inflation down, found itself trying to stimulate the economy out of deflation through massive stimulus policies. You might argue against the effectiveness of the Fed’s policies, but we did climb out of deflation and few, if any, are worried about overall deflation occurring now.

But the coast is not yet clear. Housing prices continue to drift lower. This negative wealth effect weighs on consumers’ overall buying plans when they know their house is worth less than a year ago and maybe worth less than they paid for it. The odds of deflation returning now are low, but not zero.

If you were alive in the 1970’s, you might have answered C (No, this isn’t so bad.), thinking, “Back in my day, we knew real inflation.” Indeed, the chart on page 3 shows that inflation has been in a 30-year decline after peaking at 14 percent in the early 1980’s, with a few bumps in the road–including now. The recent blip up cannot be deemed a turning point in this long-term trend, yet. Relative to some people’s perception of what “inflation” is, today’s environment is like a walk in the park when compared to the inflation era of the 1970’s. However, it does bring back painful memories.

Finally, you may be an inflation “bear.” If so, you believe the government’s massive stimulus and easing policies, combined with rising commodity prices, will stoke the inflation fires to the point of becoming uncontrollable. And as such, you probably answered D (No, the real inflation is yet to come.).

There remains some question as to whether the spigot of liquidity can be turned off fast enough to keep inflation from becoming imbedded and harder to control. This cannot be ruled out, but we would need to see a serious increase in consumer or labor demands.

So, how would we at Trust Company answer the question I posed: “Is inflation back?”?

We are not happy about the sharp uptick since last year and are concerned that it is occurring primarily in basic commodities where supply and demand factors (prices) are often determined by uncontrollable events or situations (weather, disasters, political upheaval, etc.). Yet, we are encouraged by the fact that the prospect of deflation now seems remote compared to the fear that we and others had two years ago.

And, as the long-term chart shows, things could be a lot worse. You would need to have a few grey hairs to remember the double-digit inflation years of the 1970’s and 1980’s, and the uncertainty everyone felt.

We believe the odds of a return to runaway inflation are low. Our economy is growing, but at a subpar rate. Unemployment remains stubbornly high so wage demands are not a meaningful factor. Consumers are paying down their debt, not increasing it. Industrial capacity utilization remains well below levels that have historically increased inflation pressures.

All this argues for little pressure from “demand pull” inflation. “Cost push” inflation pressures have been strong, but may be easing some as commodity prices start to hit resistance levels. Crude oil, for instance, has backed off of its April high of around $115 to the low to mid $90’s.

We expect year-over-year CPI levels to ease back into the 2-3 percent level and not present a serious problem for economic growth or securities markets.

There’s an old saying in the investment world that bull markets climb a “wall of worry.” That is, of course, as long as there’s not too much to worry about. That’s the question we face at mid-year 2011.

Year-to-date returns from stocks are unexciting, certainly not as high as we hoped or expected, and current levels are down considerably since the year’s high achieved in April.

There’s no question that bulls are being tested by a growing number of “worries” including, but not limited to:

Wow, that’s quite a list. As this is written, the European crisis is currently front and center and certainly has the possibility of a meltdown similar to the situation in the U.S. a few years ago.

This has created a level of uncertainty that markets don’t like. Fear has overtaken greed, at least for the short-term. Stocks are down while safe Treasury securities are up in price, down in yield. The 10-year Treasury currently yields a paltry 3.2 percent, down from 3.6 percent a few months ago.

Six months ago, we envisioned 2011 being a middle year of the economic growth cycle with GDP growth of 3 percent, substantial profit growth, and stocks advancing 8-10 percent. We now see lower economic growth – but still growth. Profit growth will also be lower than previously expected, but still healthy.

After doubling between March 2009 and April 2011, stocks have given back some gain and seem to be facing a high wall of many worries. It may be tough to achieve meaningful gains until some of these problems are cleared up.

Nevertheless, we don’t see any of the excesses that would lead us to believe we are near the top of this bull cycle. We think it’s a good time to build stock positions, and that many of the current problems will be corrected over the next few months, and stocks will resume their upward move.

Patience will be rewarded.

Prosperity with a Purpose