If there is one thing our Congress is good at, it is their ability to consistently kick the can down the road and avoid dealing with real problems. While it can help to let some time pass before addressing a problem, on most occasions, the problem can become exponentially larger the longer one waits

By far, the biggest issue that our nation currently faces is our federal government’s national debt. Our federal debt continues to grow and is approaching alarming levels. As of Sept. 30, 2010, our national debt totaled $13.6 trillion and is expected to increase another $1.3 trillion over the next year. As you can see from the chart, our government has incurred deficits for most of the last three decades. In 2010, our federal deficit represented more than 10 percent of our nation’s GDP (gross domestic product). As a rule of thumb, when a country’s deficit exceeds 10 percent of its GDP, debt markets become concerned. 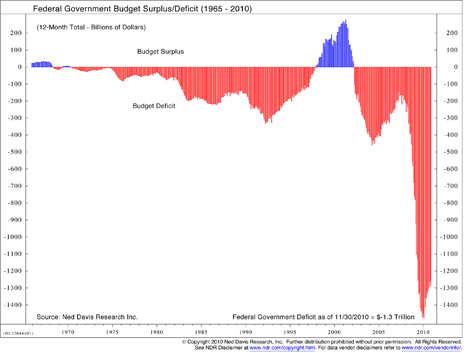 If $13.6 trillion was an accurate estimate of our debt, my concern would be limited. However, when you add the $30.9 trillion unfunded liability for Social Security, Medicare and other federal programs to our current $13.6 trillion debt, our total debt would be more than $44.5 trillion as of September 2010.

To make matters EVEN worse, the $30.9 trillion unfunded liability is significantly underestimated. In December 2010, the government lowered its estimate of this liability by $15 trillion based on unrealistic assumptions concerning significant reductions in future health care costs based on the full implementation of the ObamaCare legislation. As an example, these numbers assume that payments to Medicare providers will decrease by 30 percent over the next three years! In the past, our government has projected similar payment cuts to Medicare providers. However, each time these cuts are about to occur, Congress delays their implementation.

If you include a more accurate estimate of our unfunded liabilities ($46 trillion) and our outstanding debt ($13.6 trillion), a good estimate of our total debt is $60 trillion. To put this number in perspective, $60 trillion is equivalent to $523,000 per U.S. household. While a few American households can afford to write a $523,000 check to pay their share of the debt, most can not. When the median household income is approximately $50,000, and the average household is already highly leveraged, another $523k of debt doesn’t really work.

Addressing the unfunded liability for Medicare will prove even more difficult. Medicare costs continue to escalate at an alarming rate, and there are no easy solutions. Unfortunately, solving the Medicare problem will likely include increased taxes, reduced Medicare payments to doctors and possibly rationing of medical care (my least favorite option). None of these solutions help politicians gain votes and this likely explains why Congress continues to kick the can down the road.

The longer we delay action, the more difficult the solutions become. Most Americans on both sides of the aisle want honest dialogue regarding what it will take to begin reducing our debt to reasonable levels. We recognize that there are no easy solutions and eventually significant changes to Medicare and Social Security will be required. Most of us hope to continue the tradition of leaving our children and grandchildren with a better America. But, if we’re going to do that, we need to act now.

Now on to a much more pleasant topic— tax cuts. After much debate, Congress finally passed and President Obama signed a significant tax cut package. Included in this bill were meaningful tax cuts that we believe will help stimulate the economy and yes, even reduce the unemployment rate over time. In fact, Moody’s estimates that the bill will shave more than a point off the unemployment rate, pushing the rate well below 9 percent in 2011. A few highlights of this bill include:

•Extension of all of the Bush income tax cuts. This will keep marginal tax rates at 2010 levels for two years.

•Extension of the 0 percent and 15 percent long-term capital gain rates and the 15 percent tax rate for qualified dividends for two years.

•A 2 percent reduction on the employee’s portion of the payroll tax for one year.

•Reduction of the estate tax rate to 35 percent and an increase of the unified tax credit to $5 million for two years.

•A one-year extension of unemployment benefits.

Some fiscal conservatives opposed this package on the grounds that it only makes our debt problem worse. However, our debt problem is really due to over-spending, not under-taxation. There is substantial evidence that Congress will spend above and beyond what it takes in taxes, regardless of the amount of taxes taken in. Increasing marginal tax rates, in all likelihood, will not solve our debt and spending problem.

It is encouraging that a bi-partisan deficit commission was put together to discuss, debate and ultimately recommend how our country should address our deficits going forward. It is not encouraging that now that the commission has issued their report, no meaningful dialogue has taken place by our elected officials as to how they hope to trim our deficits over time. While we welcome the tax cuts that were recently passed, we are concerned there were no spending cuts implemented to offset the cost of those tax cuts.

On Nov. 3, 2010, the Fed announced the second phase of their quantitative easing (QE2) program. With QE2, the Fed plans to buy $600 billion of additional government bonds over the next seven months, increasing the size of their portfolio to $3 trillion. The Fed’s hope is that QE2 will help maintain low interest rates, stimulate consumer spending (and employment) and eliminate fears of deflation. This is an untested approach to monetary policy. We are skeptical whether QE2 will be effective, especially given the fact that high quality borrowers already have access to loans at very reasonable rates. Unfortunately, intermediate interest rates have actually increased by almost 1 percent since QE2 was announced.

This has been a very good year for the market and an encouraging year for the economy as well. The market returned 15 percent in 2010 and has rallied 24 percent since bottoming in early July. Third quarter GDP increased 2.6 percent which was the fifth consecutive increase since the recession ended in June of last year. While the most recent recession lasted 18 months, we should all take comfort in the fact that the market has returned more than 93 percent since bottoming in March, 2009. In fact, the market has now recovered to the point that it is back above the 2008 Pre-Lehman Brothers crisis levels. While the rally is encouraging, the market is still 14 percent below the October, 2007 market peak.

Perhaps the most important driver of the markets over the last two years was the near zero return on risk-free assets, such as Treasury Bills and money market funds. After record inflows into money market funds in 2008, these funds have seen record outflows over the last two years. Surprisingly, until recently, the majority of cash has been in invested in bond funds rather than stock funds. The Barclays Aggregate Intermediate Bond Index was up 5 percent in 2010.

We think it is important for investors to be careful with their bond investments in the future. With rates likely increasing over the next few years, we do not feel that now is a good time to stretch for yield by buying longer-term bonds. The good news is that it is unlikely the Fed will raise interest rates in 2011. The Fed will likely wait for firm evidence that the economy is growing at a reasonable rate, that consumer spending is accelerating and, most importantly, that we begin to see a meaningful decline in the unemployment rate. This is unlikely to occur prior to 2012.

Housing remains part of the negative feedback loop as well. While housing appears to be stabilizing, a true recovery does not yet appear to be at hand. House prices are still well below their peak prices of 2006. The level of foreclosures remains quite large. Many Americans have had their home equity wiped out or greatly reduced and this will continue to hinder consumer spending near-term.

While positive GDP growth over the last five quarters is certainly encouraging, the growth rate is far below the rates normally experienced after recessions. In addition, this recent growth was significantly impacted by a dramatic increase in government spending as well as inventory restocking. Neither of these factors can continue indefinitely. While the tax cuts will help future growth, we need to see improvement in the labor market to become confident in a sustained recovery.

We believe valuations in the market are reasonable. As a result, we expect the market will grow in line with underlying earnings and dividends growth. Since we are anticipating average GDP and thus earnings growth, we are anticipating average stock market returns (10 to 12 percent) for 2011. It is helpful to remember that we have survived the worst market downturn since the Great Depression, and the market has rallied more than 80 percent from the lows. There will be volatility along the way, but we should all take comfort in the fact that the worst is likely behind us.