My wife, Julia, and I love road trips. And when pointed westward, our vehicle seems to go a bit faster, harnessing its horsepower to deliver us more swiftly to the smell of pine and sound of wind through the trees. This past summer we headed west once again, but this time crossing the desert of the American Southwest.

It’s hard to pass through the Southwest without being in awe of the wide-open spaces that make you feel both exposed and insignificant at the same time. In the Mojave Desert, west of Needles, California, these feelings were amplified. The road was filled with cars, semis and all sorts of RVs. Yet, on either side of the blistering-hot asphalt, much further than the eye could see, was land that is barely inhabitable, and starkly beautiful.

Besides the stunning desert, my other reason to relish the Southwest? The endless line of trains traversing the barren landscape. For me, trains symbolize the building of our country. The steel rails anchored to the ground also anchor us to our past.

“Look at that long train!” I would shout from behind the wheel, deftly staring off in the distance with one eye while keeping watch on the road in front of me with the other. Long before the 20th spotting, Julia grew tired of these reports. But even she was impressed by a train which appeared to be over two miles in length – much too long to count all the cars.

Boxcars, double-stacks, tankers, covered hoppers – all connected as if each train was a microcosm of our economy, hauling appliances, clothing, food, oil, lumber, grain, autos and a whole lot more. A single train car carries enough lumber to build 5 ½ homes or enough corn to feed 37,000 chickens for life. One tanker car carries enough oil to make the gasoline to power your standard SUV traveling coast-to-coast over 100 times.

I lost count how many trains we observed moving goods to and from California. And those were just on the Burlington Northern Santa Fe lines from Albuquerque to Barstow, (CA) paralleling I-40. Further south, Union Pacific trains fill the rails paralleling I-10. Massive machines thundering against the backdrop of the desert Southwest. What a sight these convoys make!

Driving back home to Tulsa, on the outskirts of Flagstaff, I was standing on a gravel lot late one night. Almost a half-mile away, a train was doing its best to slip quietly through town. Yet, under my feet, the ground was steadily vibrating, like a soft, steady hum singing of its arrival. The enormous power of locomotives strung together, delivering the goods to the shelves of America. It’s enough to bring tears to this big kid’s eyes. Yes, I have a traincrush.

Our Investment Perspectives newsletter will soon show up in your mail/email box. The lead article discusses tariffs and trade; a very timely, clearly written article for all of us. My colleagues also wrote two other good, quick reads – one on how to talk to your family about your estate plan and one on an important tax strategy for many to consider.

As for the markets, large-cap U.S. stocks hit record highs in September and developed international stocks showed strength as well. Mid- and small-cap stocks and emerging market stocks were generally down. Fixed income investments also posted modest losses due to the continued rise in interest rates. The Fed raised short-term rates in September – the 4th increase in the past 12 months. 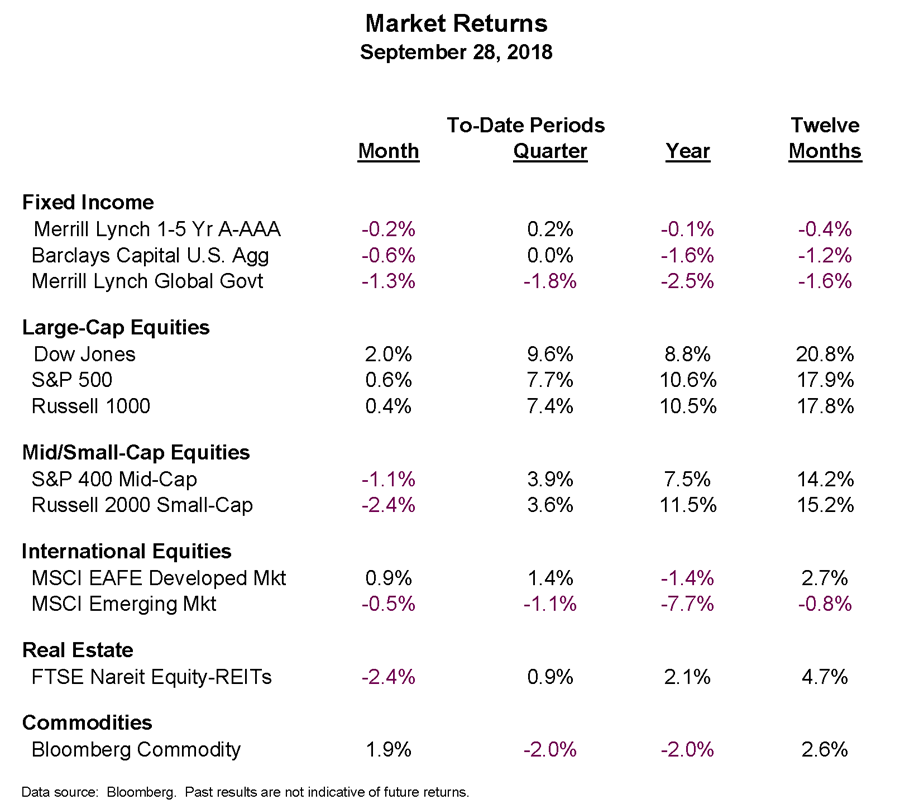 How to Survive A Bear Market – Bob McCormick’s Market Observati...
Scroll to top