The Unknown Certainty of Taxes

As the old saying goes, nothing in life is certain but Death and Taxes.

Oh sure, we know we will have taxes next year. We just don’t know what they will be. With Congress deadlocked on the issue of taxes, both income and estate taxes, and no resolution in sight, we cannot be so certain of what the tax burden will be on either the living or the dead come January 1, 2011. 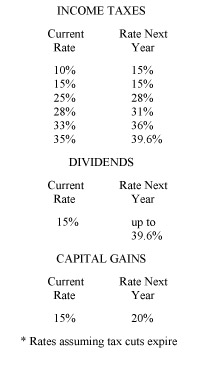 As things stand today, the highest income tax bracket rests at 35%. Both capital gains and dividends are taxed at 15% and the estate and generation skipping taxes have disappeared entirely. Should Congress choose the easy way out and do nothing, on January 1, 2011, all of the Bush-era tax cuts currently in place will disappear and tax rates will reset to 2001 levels. This inaction will not only affect the high income earner but almost all taxpayers. Not only will most marginal rates go up, taxpayers may find themselves pushed into even higher rates due to the phasing out or limiting of various deductions.

In his 2011 budget proposal, President Barack Obama has proposed an extension of the Bush-era tax cuts for middle class taxpayers only. Under President Obama’s plan, higher earning taxpayers, defined as individuals with incomes over $200,000 and couples earning over $250,000, could expect to see income tax marginal rates rise as high as 39.6%, up from 35% this year.

Dividends and capital gains taxes would rise, up to 39.6% and 20% respectively. On the estate tax side, the President has indicated a desire to see the estate tax revived at 2009 levels.

Those estates valued under $3.5 million would continue to enjoy exemption from the estate tax and the highest estate tax rate would be 45%.

The President’s proposal however does not enjoy universal support among either Republicans or Democrats. Although neither party advocates allowing all the Bush-era tax cuts to expire, the plans competing with the President’s proposal are many. Congressional Republicans support a permanent extension of all Bush-era tax cuts regardless of income level.

Support in Congress also can be found for a temporary, two-year extension of income tax cuts, either for all income levels or only for those affecting the middle class and below. The proposals are just as varied on the estate tax side. With the estate tax currently set to jump next year from a marginal rate of zero to 55% and an exemption of only $1 million, this may be the one place where the parties can find room for compromise.

As of the publication of this news- letter, no Congressional action had been taken. Indeed, any action by lawmakers will likely be put on hold until after the November elections for fear of angering voters by either raising taxes or cutting them. With the year running out and tax law changes possibly occurring near year-end, what is an investor to do? Perhaps the best advice at the moment is to watch and wait but be prepared to consult with your tax and estate advisors near year-end, after any action by Congress and the President. If no action is forthcoming, taxes will go up as scheduled.

In this case, investors who will be needing cash in 2011 may want to consider accelerating gains in 2010.

Likewise, capital losses may be more valuable in 2011 as they could offset higher taxed gains then. Investors should not let the tax tail wag the dog, but timing of income and deductions between 2010 and 2011 could be a significant issue for some. Death and taxes may still be a certainty, but uncertainty in the tax code reigns supreme as we look into 2011.

Get to know your Social Security options

The Path to Bringing Jobs Back Home
Scroll to top