Finding a Cure for Inflation

Finding a Cure for Inflation

Tighter Monetary Policy Is Only Part of the Solution

After two extraordinarily odd years, through COVID in 2020 and the economic rebound and bull market in 2021, many of us were lulled into thinking that good times were here again. The economy had returned to relative normalcy, investment portfolios were reaching new heights, kids were doing everyday kid things again, and masks were no longer required in most places. But as Lee Corso likes to say on Saturday mornings in the fall, “Not so fast, my friend!” Underneath the façade of economic normalcy, things were not all well.

Inflation began percolating in mid to late 2021, reaching worrisome levels that had not been seen in several decades. Arguably, the most influential institution for the global financial markets – the Federal Reserve – made the biggest mistake of all by misdiagnosing the initial inflation as “transitory.” However, things have become worse since then, with energy prices spiking and housing prices and rents continuing to rise at double-digit rates. You’ve probably noticed on the latest trip to the grocery store just how painful these price increases have become, with food inflation currently up 10% year-over-year.

Given the historically low starting point for interest rates and their rapid increase, this year has been one of the worst on record for bond returns. This has resulted in a “short-term pain for long-term gain” situation. In other words, despite the recent decline in bond prices, investors should ultimately fare better over the long run, assuming they stay fully invested. Future interest earned on reinvestment of both interest and principal as bonds mature will result in better long-term returns than if interest rates were to stay low (and bond prices stay high). For example, a typical A-rated 10-year corporate bond currently yields about 4.5%, whereas that same bond yielded 2.0% just one year ago. Although bond prices are down, that’s more than a doubling in yield earned for holding the same bond.

Inflation Is (Unfortunately) Back

Why have interest rates risen so sharply this year? In August, the Federal Reserve Bank of Chicago answered that question in a working research paper, stating, “Inflation is back. After two decades of low inflation, policymakers all over the world are newly confronted with a high bout of fast-growing prices.” However, the more provocative idea advanced by the paper is that, “Low and stable inflation requires an appropriate fiscal framework aimed at stabilizing government debt. … The conquest of post-pandemic inflation requires mutually consistent monetary and fiscal policies to avoid fiscal stagflation.”

My translation of their rhetoric goes something like this:

[Federal Reserve speaking]: “Hey, Congress! We’re slinging haymakers left and right to fight this nasty inflation! But we can’t take this guy down alone. We’re doing our job, now you need to do yours. Get in here!”

This year markets across the board (i.e., stocks, bonds, housing, cryptocurrencies, etc.) have all experienced a rapid and painful adjustment to higher interest rates. Those higher rates were necessary in response to the persistently high inflation environment, which in turn resulted from an overheated economy and the over-abundant fiscal and monetary stimulus of 2020 and 2021.

Albeit far too slowly, the Federal Reserve is correcting course from its over-stimulus and now working to push inflation numbers back down into the low single digits. Monetary policy has tightened rapidly. Short-term interest rates have risen from near zero to approximately 3%. And through August 2022, the M2 money supply – the total U.S. dollars circulating in the economy – has risen only 1% from December 2021. This follows a 40% (you read that correctly) rise in the money supply from December 2019 through December 2021 due to both fiscal and monetary stimulus. 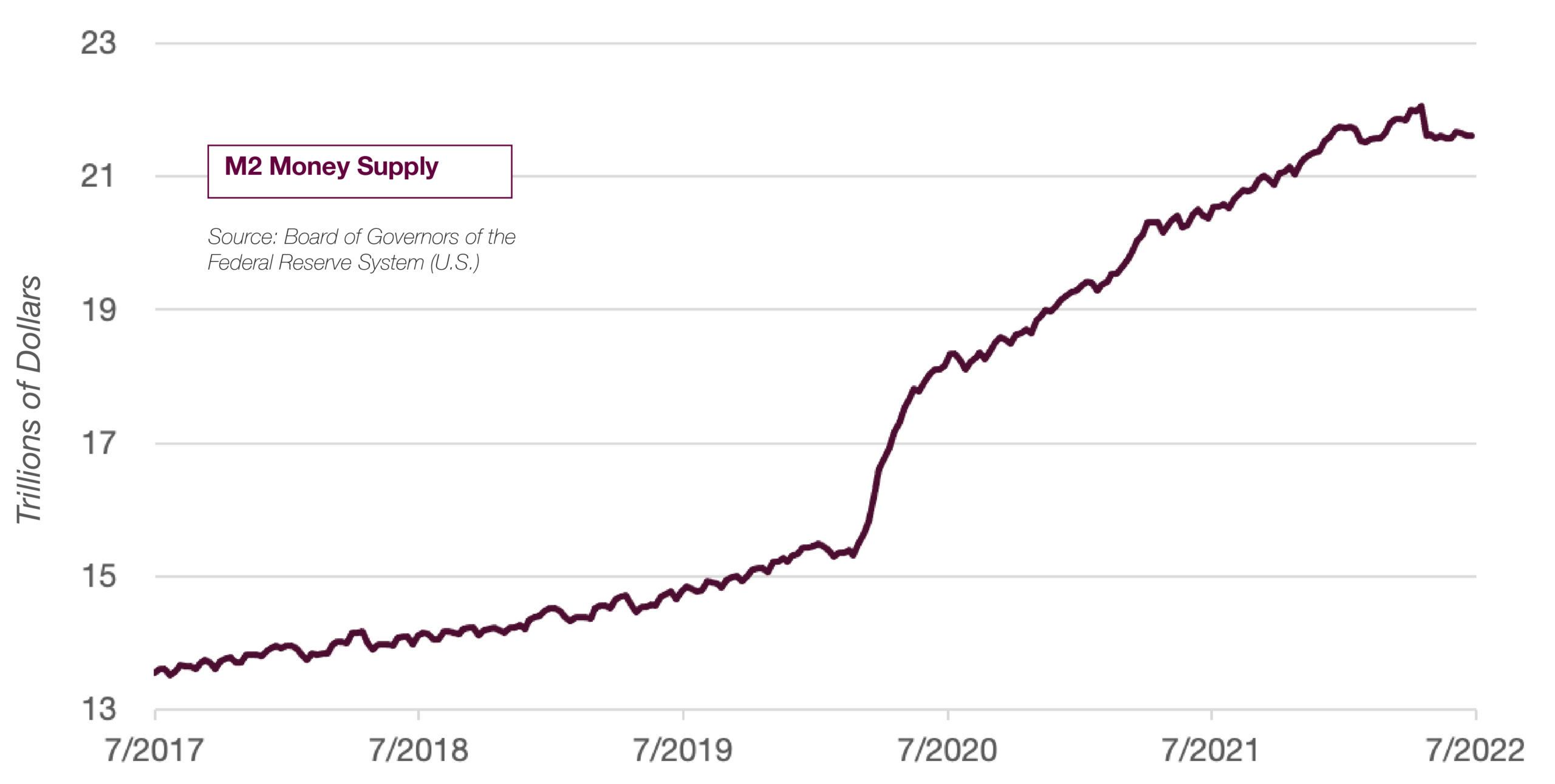 Finding a Way Back to Normal

My interpretation of all of this data is that we’re roughly halfway back to normal for inflation and the economy. There are encouraging signs that inflation is now slowly decelerating. But the additional medicine that America needs to take now is to get its budget back in order as well.

Before the pandemic, the annual federal deficit was already trending up, from around $400 billion in 2015 to $1 trillion in 2019. Then from 2019 to 2021, federal government spending increased by an astonishing 50%. The deficit reached over $3 trillion in 2020 – which was nearly 15% of GDP – before falling slightly to $2.8 trillion in 2021. The one piece of encouraging news here is that the deficit for 2022 is expected to fall meaningfully to around $1 trillion once again. 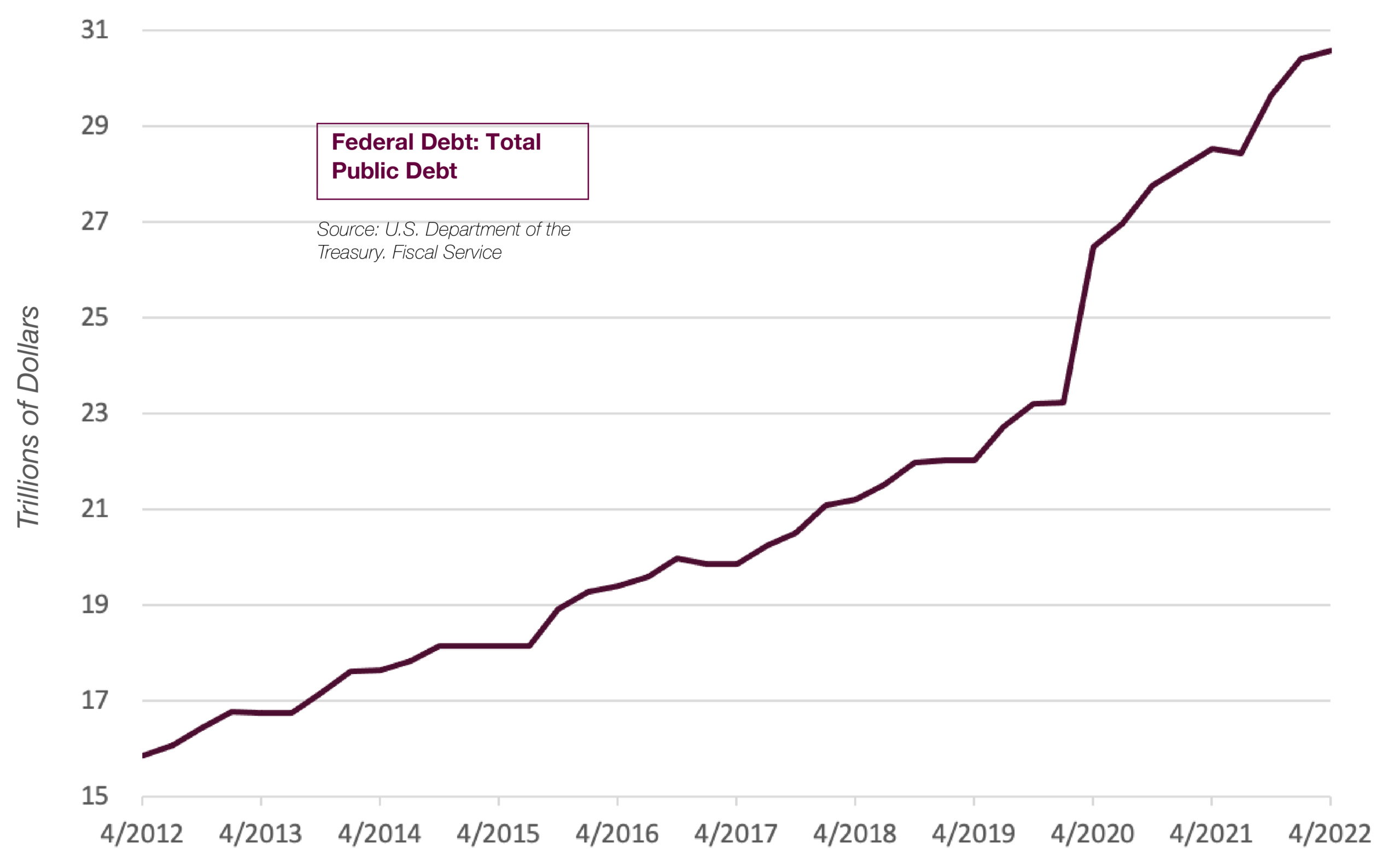 Persistent annual borrowing is clearly not a healthy or responsible way to run an economy over the long term. Consider this: If the U.S. Treasury were to refinance all Federal debt at current interest rates (approximately 3.5% to 4.25%), the interest payments alone would equal nearly 5% of our country’s total economic output. That interest burden would need to be paid either by future taxpayers or by all of us in the form of slower economic growth.

Will Congress Do Its Part?

Recently, Federal Reserve Chair Jerome Powell clearly stated that the Federal Reserve is committed to getting it right. In a September speech, Powell stated, “What we hope to achieve is a period of growth below trend, which will cause the labor market to get back into better balance and that will bring wages back down to levels that are more consistent with 2% inflation over time.” Now it’s time for Congress to get our country’s budget in order. But the million-dollar question: Is there political will in Washington to make the necessary changes?

Counterintuitively, the good news is that according to a recent Gallup poll, the majority of American people see the light. Fifty-six percent of Americans say that price increases are causing financial hardship, up from 45% less than one year ago, in November 2021. Virtually no one is happy with the present situation of high inflation, and there is now political pressure to fix it.

In 1981, the last time inflation reached this high, it took a difficult recession with significant job losses and approximately two years of recovery before inflation returned to 3%. America likely faces a similarly challenging road to recovery, given the magnitude of the current inflation problem. It has now been approximately nine months since things started to turn for the worse, so there might be another year or more to go, unfortunately.

If high inflation is allowed to persist, slow economic growth, also known as stagflation, will continue as well. The medicine the economy needs now is higher interest rates and a sustainable federal budget. The best advice we can offer is that it will be much better if we take ALL that medicine sooner rather than later, so that both the economy and investment portfolios can be healthier and return to growth.

Although the downturn in the stock market has been painful so far this year, the good news is that the market is now much more reasonably priced than it was at the end of 2021. Once it bottoms, the market will be better positioned for higher and more sustainable returns in the future. 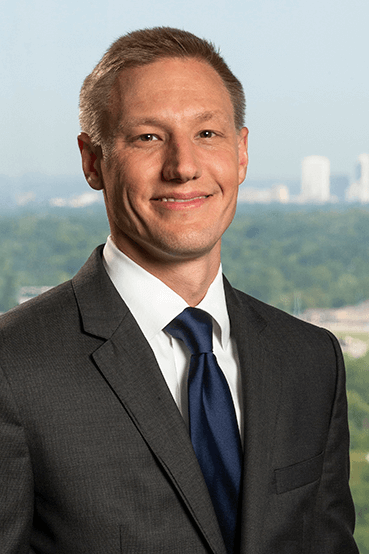