Big Tech Has Enjoyed Big Gains During the Pandemic, but How Long Can Its Dominance Last?

As we navigate year two of the pandemic, it has never been more apparent that we now live in a digital world. The pandemic has not only underscored the extent to which technology had already been integrated into the economy and our daily lives, but it has also accelerated these changes. By far, the biggest beneficiaries of these trends have been technology companies.

The S&P 500 ended last year up over 18%. A significant portion of that improbable performance can be attributed to the “FAANGM” stocks (Facebook, Apple, Amazon, Netflix, Google, Microsoft), which alone accounted for nearly half of the 2020 performance gains for the S&P 500. The market capitalization analysis chart below reflects this strong performance, showing the virtually exponential increase in the combined market value of these stocks. In 2020 alone, FAANGM’s share of the collective market value of the S&P 500 increased by approximately 8%, accomplishing in one year what had taken the prior five years to achieve.

Given the size of the tech giants in relation to both U.S. and international stock markets, the main question asked by investors today is, “Can Big Tech continue its market share dominance?” 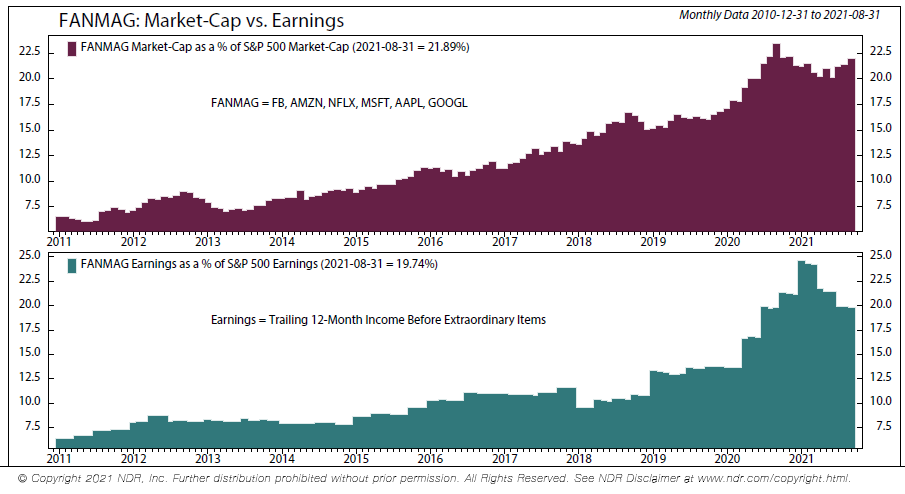 One of the potential roadblocks to future growth is regulation. Both in the United States and Europe, technology companies increasingly find themselves in the crosshairs of regulators and lawmakers. For example, earlier this year the U.S. House Judiciary Committee approved several bills seeking to break up the larger technology companies. Although committee-approved bills do not always become law, these measures had bipartisan support and indicate an increased willingness from both sides of the aisle to consider such extreme measures.

Even if a breakup scenario were to occur, this could potentially unlock more value for shareholders of these firms. Consider Amazon, which currently has a total market capitalization of approximately $1.6 trillion. Amazon has several very profitable divisions. If each of these divisions were separate companies, their aggregate value over the long-term could be much higher than Amazon’s value today. For example, using a conservative multiple of 15 times sales, Amazon’s Web Services division alone could be valued at $1.5 trillion based on forecasted sales growth of $100 billion by 2023. If that estimate is accurate, the market assigns little value for Amazon’s other business lines, such as e-commerce and advertising.

As long as regulation does not impede the growth prospects for Big Tech, investors will continue to give these firms premium valuations relative to the broader stock market.

A potentially greater impediment for the growth of Big Tech is the law of large numbers. In the context of investing, this means that the larger these fast-growing companies become, the more difficult it will be for them to maintain the same pace of growth, and the more likely their returns will eventually resemble the broader market. Investors have had these concerns for years.

This fear may not be new, but the rate of recent market share increases may warrant additional caution. For example, the market values for Apple and Microsoft stand at $2.5 trillion and $2.2 trillion, respectively. Since first crossing a trillion dollars in market value in August 2018, Apple has subsequently added $1.5 trillion in market value. Microsoft added $1.2 trillion since crossing the same milestone in April 2019. Historical analysis (per the chart below) of the stock market shows that it will be harder for Big Tech to continue this pace of outsized returns over the next half a century, as no single stock market sector has retained its dominance of the U.S. stock market. Sectors move in and out of the top spot, and dominant individual companies do as well. 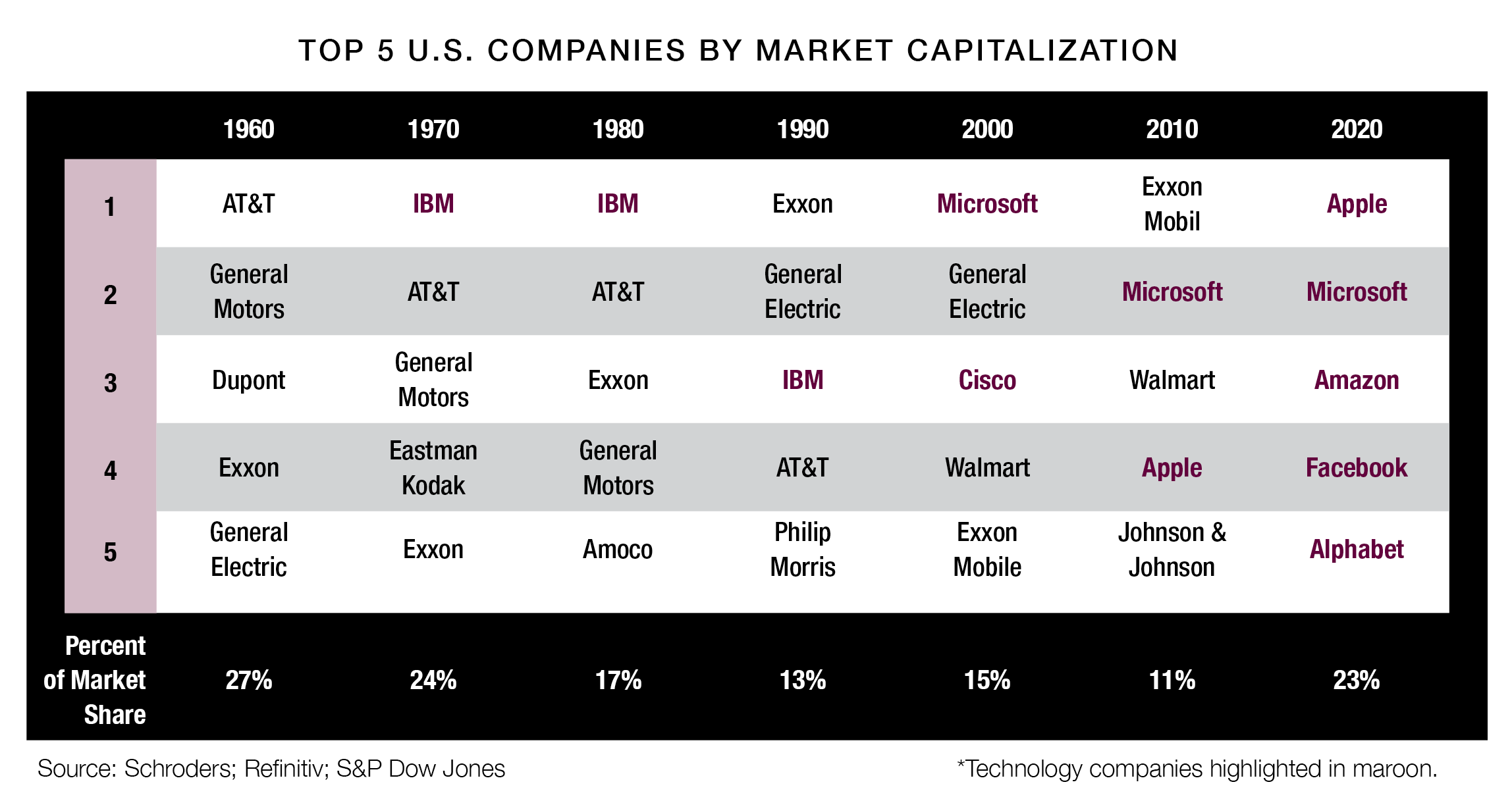 A recent study conducted by Bernstein Research evaluated high growth rate stocks for the top 1,500 companies each year over the past 40 years (1980-2020). The list contained over 6,000 total companies, with more than 1,000 in technology. Over that time period, only 31 companies were able to grow sales at 15% or more for 10 successive years, with only 13 out of the 1,000 tech companies accomplishing this same feat.

The numbers were somewhat better using compound annual growth rates (CAGR), which smooth out the annual sales numbers and better account for year-to-year fluctuations (CAGR is effectively an average annual growth rate for the entire analysis period). By this measure, nearly 20% of tech companies grew revenues at a 15% CAGR for more than 15 years. However, when factoring in company size, these rates of growth become much harder to achieve. In fact, no tech firms with greater than $25 billion in sales were able to grow revenues at a 15% CAGR for 15 years or more over this period. Given these difficult statistics, how can Big Tech possibly continue to gain market share?

The answer may come from an examination of both macro-economic and company-specific demand drivers. Global, secular technology trends in communication and collaboration, cloud computing, and digital experiences will continue to position Big Tech at the epicenter of future innovation. Additionally, there are also novel trends on the horizon that investors have yet to fully account for. Some potential examples include Apple’s possible entry into automobiles, Amazon’s entry into health care, Alphabet’s self-driving car plans, and Facebook’s metaverse, whereby people would interact over the internet in 3D.

Firm-specific drivers depend on their ability to continuously innovate and the scale at which they do so. One of the best examples of this is our cell phones, which seemingly are now used for everything but calls. In the case of Apple, CEO Tim Cook recently noted that the firm has an installed user base of more than one billion iPhones. This base gradually turns over as newer features become available. Additionally, the installed base for these companies generate annuity-like streams of revenues, such as the monthly charge for streaming services. Should one of these firms become less innovative, the revenue stream could shrink, which in turn would negatively impact the stock’s price and market share.

Though Big Tech faces increased regulatory risk and the law of large numbers, for the foreseeable future they should retain their market share dominance, while gaining market share at a slower pace than in recent years. These firms will not only leverage the behavioral shifts caused by the pandemic to expand their businesses but also increase investment in and, in turn, demand for emerging technologies. 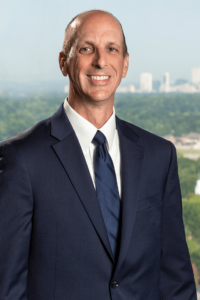