During a recent visit to my mother- and father-in-law’s, I found them huddled anxiously around their computer while talking to someone unfamiliar on speakerphone. As I drew nearer to their monitor, I could just make out an internet pop-up claiming that their computer had been infected with approximately 12,353 different viruses and urging them to contact “Apple tech suport (sic)” immediately for assistance.

Sensing what was really happening, I asked the “Apple employee” if he had ever heard the names Steve Jobs or Tim Cook. The reply came back, “Never heard of them. Who are they?” At that point, my father-in-law thankfully realized the scam and ended the call before any damage could be done.

Unfortunately, cyberscams and cyberattacks like this have become all too common — not only for individuals but for corporations and municipalities, too. Earlier this year, a ransomware attack on Colonial Pipeline resulted in fuel shortages across the East Coast, all due to a single compromised password. Locally, hackers gained access to the City of Tulsa network, crippling a variety of city services for months and potentially exposing thousands of residents’ private information.

Thankfully, you can help protect yourself by following these five tips: 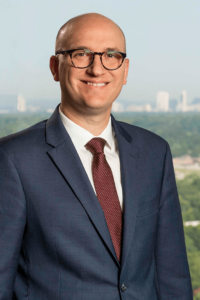 Illustration by TCOTaking Stock of Big Tech
Scroll to top