As a kid, I loved creating wish lists. Perhaps not all my wish list items were realistic, but what kid doesn’t want a pet tiger? President Joe Biden recently released his American Families Plan revenue proposal, which is essentially his tax policy wish list. This request might never become law, but it provides a road map for tax changes that might be enacted by Congress. The overall proposal is expansive, but let’s dive into a few key pieces.

Currently, gifting appreciated assets does not trigger the recognition of capital gains. Instead, the giver’s basis carries over to the receiver. For example, if you give your daughter XYZ stock currently worth $1,100 and your adjusted basis is $500, she does not pay capital gains tax at the time of the gift. Rather, your basis of $500 carries over to your daughter. If she later sells the stock for $1,300, she would recognize a capital gain for the difference of $800.

The proposal would reclassify gifting as a trigger for recognition of capital gains. Under this change, in the same example as above, you would recognize a $600 capital gain at the time of the gift, and your daughter’s basis in the stock would be $1,100. If she later sells the stock for $1,300, she would only recognize a capital gain of $200.

Likewise, the proposal would reclassify in-kind distributions from irrevocable trusts and partnerships as similar triggers for capital gains recognition. However, the proposal would delay capital gains recognition on the gifting of family-owned and -operated business interests, including farms, until the business is sold or ceases to be family-owned and -operated.

Currently, if an estate’s fair market value exceeds the individual’s lifetime exemption amount ($11.7 million per person for 2021), then the estate pays 40% estate tax on the value exceeding the exemption amount. However, the heirs’ basis in the assets they receive are given a free “step-up” in basis to the fair market value of the assets as of the date of the decedent’s death. It is a free “step-up,” because the unrealized capital gains are erased and never subject to capital gains income tax.

The proposal would not erase those capital gains. Instead, the estate would pay capital gains income tax on all unrealized gains at the decedent’s death, potentially at the proposed increased rate of 39.6%, along with the existing Net Investment Income Tax (NIIT) of 3.8%. Additionally, the estate would still be subject to the 40% estate tax on any value exceeding the decedent’s lifetime exemption amount. The heirs’ basis in assets received would still “step-up” to the date of death value, but it would come at the cost of the estate paying capital gains taxes on the appreciation.

To slightly soften the blow, each individual would receive a new $1 million lifetime exemption, or $2.5 million per couple, for capital gains triggered by gifting or by death. Additionally, any capital gains tax paid by the estate would lower the overall estate value subject to the 40% estate tax.

The higher the unrealized gains in the estate, the higher the potential effective total tax rate charged to the estate. See the chart below for examples. 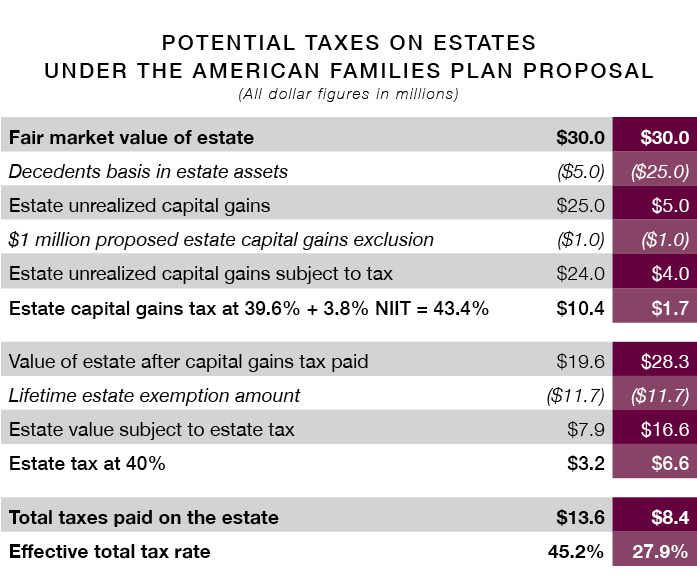 During his campaign, Biden discussed many potential tax reforms that were not included in this current proposal. Some of the more notable items omitted include:

The American Families Plan proposal will lead to negotiations in Congress and will likely produce a smaller tax increase than the proposed amount, if anything at all. Given the uncertainty, preparation is wiser than making predictions, especially when politics are involved.

We will have to wait and see which of Biden’s wish list of tax changes come to fruition. Just like the items on my childhood wish list, some of the tigers included in Biden’s list may morph into house cats by the time new legislation passes Congress, but only time will tell. 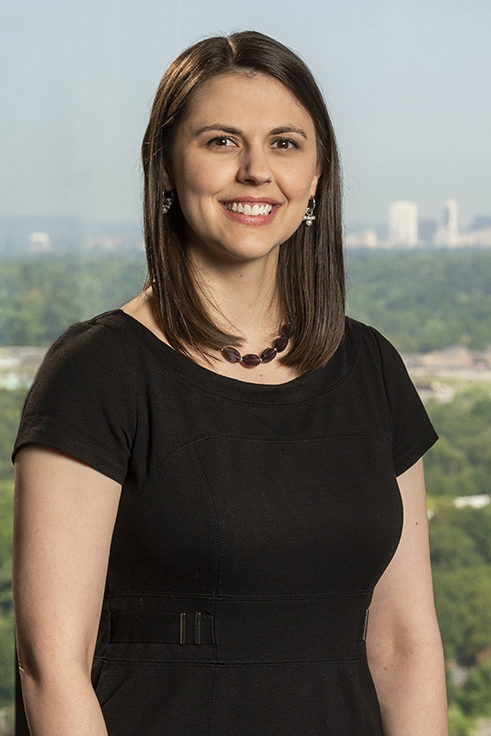